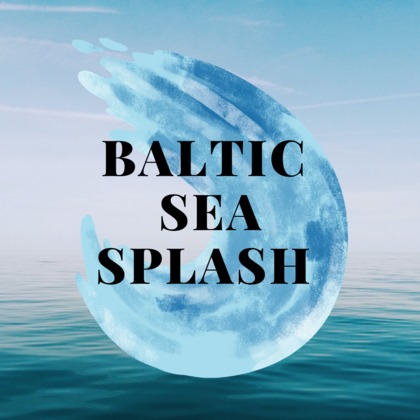 To increase discussion around sustainable innovations, carbon capture and possibilities for companies to be more environmentally friendly in a way that is not only costs but create actual business value for the company.

The Baltic Sea is considered to be the most polluted sea in the world. Large areas of the sea bottom are dead or nearly due to poor oxygen conditions. Nutrients, especially phosphorus and nitrogen have caused eutrophication which is a threat to Baltic Sea's biodiversity.

There are many organizations and initiatives that help save the future of the Baltic Sea, most of which are volunteer-based.
Also, at the same time companies are more and more interested in corporate social responsibility; how they can for example operate in an environmentally friendly way. Yet not many companies have successfully included environmental matters to their daily operations. Also, companies that have been created to have an impact on climate, mostly small ones or startups, are often struggling with financing.
The purpose of our project was to arise awareness of how responsible business can help save the Baltic Sea and to create discussion around the topic of environmental business not always being only costs but creating actual business value.

Central Park, Helsinki is a chapter in Finland. Our projects and events are usually connected to environmental issues or entrepreneurship and business development. It was very clear to us from the beginning that we wanted to create a new project that impacts the Baltic Sea but is also connected to business in some way.

ANALYZE - We started the project by first discussing about the possibilities and the subject in general within our project group. The whole idea of this project originally stemmed from one of our senator, who also is a senior advisor at a non-profit organization, which works to find solutions and right actors to restore the good ecological balance of the Baltic Sea. After familiarizing ourselves with the issue we started to discuss with that organization's people. We wanted to know what we could do together for the Baltic Sea. We understood that the main issue when it comes to the problems of the Baltic Sea and companies, is mainly lack of communication between different stakeholders.

DEVELOP - We came up with an idea of arranging roundtable discussion and a webinar. Discussions would be for invited people from different backgrounds that share the same interests and the webinar would be open for all. The goal for the roundtable discussion was to let people network and discuss about the topic but also to create connections that would last when those people left the event. We wanted to have a couple of different topics that are really relevant and that really help getting people to make a change. Since not many people can participate in a roundtable discussion, we also created a seminar with dashing keynote speakers for everyone interested in environmentally friendly business.

EXECUTE - Originally the idea was to have both events face-to-face in March 2020, but due to COVID-19 we had to cancel. Because the situation did not get any better in fall, we made a decision to arrange both events virtually with Teams. First event was the roundtable discussion. We had two tables, and both of the topics came from the non-profit organization we worked with. We wanted to decide the topics with the organization we partnered up with, because they had the expertise and knew which topics are not that much discussed yet.
One of the tables was about the possibilities and threats of digitalization in carbon capture and the other table was about commercializing carbon sequestration innovations. We invited people from ministry, start-ups, finance industry, research and specialist organizations and other companies. We had two experienced facilitators outside our chapter. In the webinar we had speakers from three companies and the subjects varied from circular economy to carbon capture.

REVIEW – After the events we collected feedback and also called to some of the participants to hear what their thoughts were. Also, we arranged feedback discussions with the two facilitators of our roundtable to get their input of what went well and what we could develop. Also, a discussion with the organization we partnered up with is coming.

PARTNERSHIPS – It was clear to us from the beginning that we are not enough skilled in the subject to really create a project that has an impact on restoring ecological balance of the Baltic Sea. That is why from the beginning we partnered up with an organization and worked closely with them.

Since our goal was to arise awareness, get people to know more and network, it was great to hear extremely positive feedback from both the roundtable event but also from the webinar.
Webinar was described to be thought-provoking, inspirational, motivational and very informal. The goal for the webinar certainly was met.
Roundtable discussions were described to be inspirational, interesting, motivating and extremely important. People enjoyed discussing with each other about the subjects and our facilitators also enjoyed it. We have heard that because of our discussions and letting people get to know each other, there are currently discussions going on in the public authority side but also in companies. Because of our event, more collaboration and business possibilities have already been created. We anticipate that even more will come.
Our team was surprised how interested people were to join our discussions and also to join our webinar. The project was a great success because we made actual impact but also because our project team was so interested and inspired by working towards the goal.

Even though our event's core idea was simple, so was the issue we wanted to tackle. Only by bringing people together to network and talk about important things can be a beginning for a great collaboration and change. It was very imporatant for us to have a partnership from the beginning of the project so that we really had the possiblity of creating something long-lasting and meaninful.