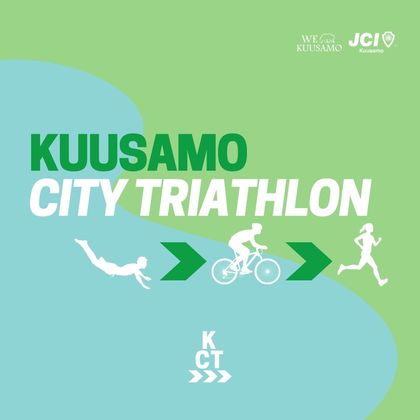 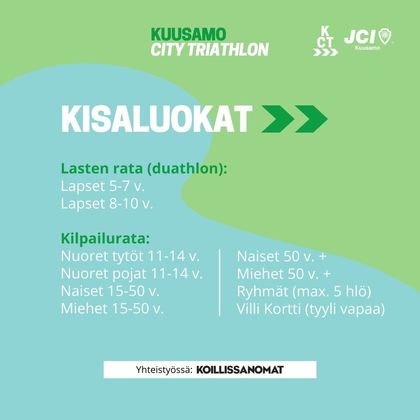 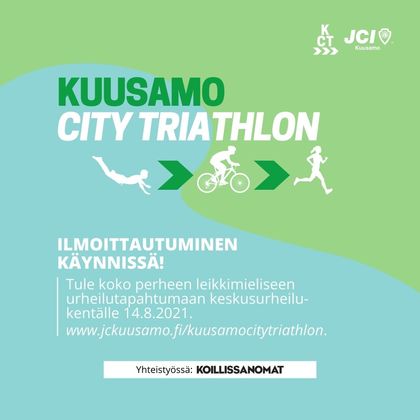 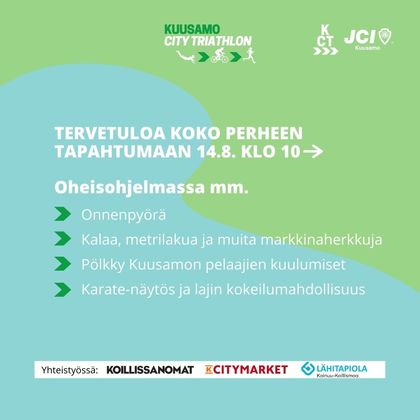 Our target was to give people hope for a better future and a normal post pandemic life. We wanted to make it possible to participate in the event with a low threshold, either by competing on the track or by enjoying the programme among the audience. We also wanted to follow the new city strategy of Kuusamo by making better choices with the race materials, for example, and by welcoming families to the event.

Our intention was to enliven the city of Kuusamo and bring local companies and societies together. To be successful, the project would require cooperation with various partners. We wanted the cooperation to be mutually beneficial and rewarding. By bringing life to Kuusamo, local companies and businesses would also benefit from it. People from nearby areas would certainly take part in such an event and bring potential purchasing power to Kuusamo. Events and the high season are significant moments for the local business economy. The event also would open up opportunities for new contacts and help JCI Kuusamo to become a widely known partner.

A good mood sport event would encourage everyone to exercise and activate people in a post pandemic time, which would increase people’s mental well-being. Implementing the project would also increase community and well-being within the members of JCI Kuusamo. Our target was to create the concept of Kuusamo City Triathlon so good that it will become an annual event in the future.

Kuusamo is a small town in northern Finland. There are about 15 000 inhabitants in Kuusamo, and as well our chamber is small; 13 members in the beginning of this project. Our strength is to create different and quite big events. JCI Kuusamo is a significant factor in the region. From the beginning it was very clear to us that we wanted to enliven our region and create a positive atmosphere to our hometown and between our members.

ANALYZE – “Kuusamo is good for families” is part of the new city strategy of Kuusamo, so we wanted to create a good mood family sport event where everyone was welcome. Our project should be outdoor public event because Covid-19 situation was unclear. We also had to plan different strategies for organizing the event under Covid-19 restrictions. We wanted to enliven our region so we decided to co-operate with different sectors in our region. We also wanted to take care of our environment with better and reusable material choices.

DEVELOP – First, we began to map out where we can host such an event. We figured out what kind of distances are suitable for even the basic fitness enthusiast. We planned different competition categories to find a suitable one for everyone. We reused race materials from our older sports events, just added the Kuusamo City Triathlon graphics to them. These materials can be used for the next year’s event as well.

We had to think about how we would handle water points for hydration as well as showers and toilets for our competitors. Involving partners in the event was crucial and we thought about how would they support us and what we can offer to them. In addition, we needed a visual identity and marketing plan for the event. There should also be some sideline program for the audience during the actual competition. We found out which licenses we’d need for such an event and what kind of traffic control and rescue plans were needed. Of course one of the concerns was the weather and the timing of the event, so that the weather isn't too cold and there are people in town. We also considered how could we bring out our own style of doing things (so called Kuusamo twist) at the event.

EXECUTE - The team included practically all the members of our chamber and everyone had a specific task.

The race was planned to be considerably shorter compared to the normal triathlon route. The final race route of the adult’s category included swimming 100 meters in the lake, cycling 10 kilometers and running 3 kilometers. The length of the race route was partly shaped by the best way of implementing the route.

As an additional spice for the official Kuusamo City Triathlon route, we came up with the “Wild Card” category, where the only award criterion was entertainment value. The race route was allowed to be divided into smaller sections among the team, in addition to which all kinds of non-hazardous aids were allowed.

In addition to the competition, the event area included activating demonstration points for sports clubs, as well as partner stalls and, for example, lotteries. The entry fee for the competitors was 20 euros for adults and 10 euros for children. Participants as a group received a group discount. During May, registrants received a five-euro discount on the normal entry fee. The event was free of charge for the public.

Eventually, we also got a partner to live stream the award ceremony on YouTube. The stream also featured a highlight video that was filmed throughout the competition.

REVIEW - The competition was attended by 40 people, out of 43 pre-registered. The competitors did their best in the competition and showed us a great attitude. The Wild Card class proved to be by far the most popular race class. Last-minute participation was not offered due to the Covid-19 situation, but in the upcoming years it would likely increase the number of participants significantly. In addition, the option of a longer race route is being considered for next year. The number of participants was good given the current situation so each start could be planned safely. It was also easier to deal with the smaller number of participants in terms of organizing the event for the first time.

The audience really hoped that the same event would be held in the future and we got a lot of development ideas from both the audience and the competitors.

PARTNERSHIPS - It was clear from the beginning that we needed partners who would be securing the financial side of the event. The city of Kuusamo believes in our ability to do great events. We are already a well-known factor in the area and we have a lot of impact on the community. Many of the local companies were interested in the project. In Kuusamo, they are usually happy to support athletes and sports events.

In the end, the biggest organisations were surprisingly difficult to get involved. Probably because the event was new and no one knew how it was going to succeed.

Our goal was to enliven our hometown and start sustainable cooperation with various actors. We wanted to create a positive atmosphere among the locals and at the same time improve the team spirit of our chamber.

With the project, we gained local and national credibility as event organizers and garnered a lot of praise for the event. For one summer day, there were a lot of people around the sports field watching the races and enjoying the programme. We received feedback that the competition would be held in the future as well, which already says a lot about how we managed to organize the event. In addition to praise and thanks, we also received suggestions for improvements, all of which are quite achievable and will certainly be taken into account in next year's event.

A couple of competitors said that they had to do some exercising and stay fit during the vacation, when there was a goal ahead. We can state that being aware of the competition motivated the participants to move during the summer.

Cooperation between different actors is off to a good start. For the next time, we already have more evidence of the event and its volume, so it may be easier to get partners. There is also a lot of marketing material, so we have the opportunity to get more participants to the event as well.

The team spirit of our chamber experienced a big improvement and something magical happened over the race weekend and everyone was working determined towards a common goal.

The project required a lot of work from our members, but in the end it was worth it. This was the first project for many of our members and everyone was excited about the project idea. Kuusamo City Triathlon is feasible anywhere and is also customizable.