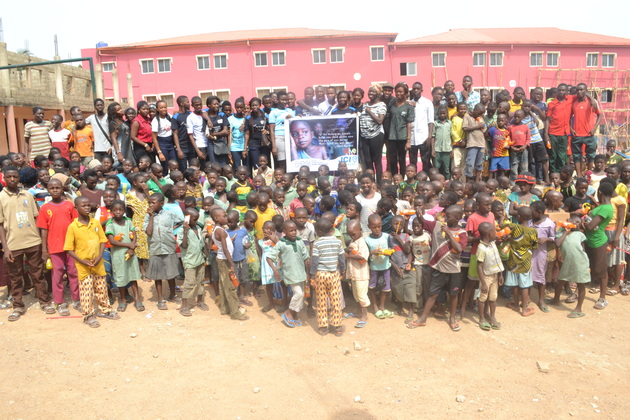 OUR INTERVENTION As a community of young agents of change, saddle with the responsibility of creating positive impacts in our communities, we embarked on the ‘Displaced not Misplaced’ project. The project was meant to bring hope to displaced children, who have become orphans due to the current crisis in the Northern part of Nigeria – in extension, other less-privileged children. The project also raised awareness, sensitizing the Federal University of Agriculture Abeokuta, Ogun state, Nigeria community about the need to help the less privilege and show love – in our own little ways – to the orphans

The North East zone of Nigeria have been plagued by the dreaded terrorist group, Boko Haram for several years, leaving tens of thousands dead, several injured and displaced. The Federal Government of Nigeria, through a statement from the Attorney General of the Federation and Minister of Justice, recently informed that close to six hundred and fifty thousand Nigerians have been internally displaced while one million are refugees in neighboring Cameroun, Chad and Niger . While debates are ongoing on the number of displaced persons, there are no official figures yet on the number of children that have been ‘orphaned’, and missing out of basic education, or lacking access to adequate food to physical and mental development, due to the crisis. With several of these children scattered across IDP camps, orphanages and juvenile homes across the country, there is a growing need to bring hand of all stakeholders on deck, in ensuring that they are not forgotten, are catered for and overcome the psychological trauma through effective love shown by their immediate communities. JCI Nigeria Federal University of Agriculture Abeokuta, Ogun state, has taken it upon herself to sensitize these traumatized kids by making them feel loved and see that there is always a light at the end of the tunnel.

We will recommend that more chapters visit these kids who still need alot for them to live a normal life. They need the following -mentoring -clothing -food -feel loved. -scholarship and many more.

Our milestone include: •Feeding over 300 displaced but not misplaced children •Encouraging over 300 orphans to see the bright side of life •Making over 300 orphans to feel loved •Imbibing the act of giving in the mind of our donors. •We have also been able solve two (2) out of the eight (8) Millennium Development Goal (MDG) which are: ‘Eradicating extreme poverty and hunger’ and “Achieving universal primary education’