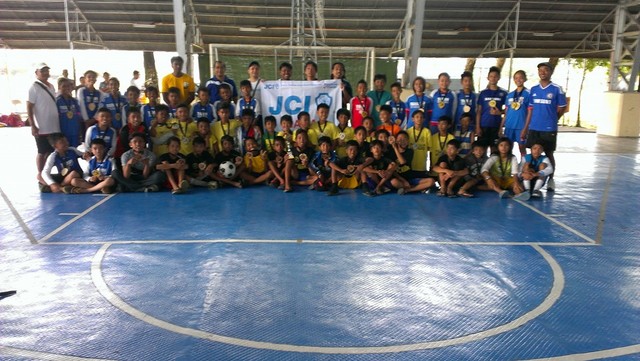 U13 football players of Naga City and nearby municipalities

The Jesse M. Robredo Memorial Football Cup is an annual football tournament hosted by JCI Naga aiming to develop football in Naga and outlying cities and municipalities. Its main objective is to develop grassroots football in Naga City. The long term goal is to provide a source of talent pool from which the city can select its football players for regional and national tournaments. The program also aims to provide selected players the opportunity to earn scholarships by looking for schools to tie up with (this is still in the planning phase). For now, the program is focusing on establishing an excellent track record in order to be recognized by the city as a premier football tournament and a valid avenue for selecting the city’s football team.

The JMR Cup is a spin-off of the defunct Mayor’s Cup that used to be the city’s football tournament for Elementary and Secondary children back when Jesse Robredo was still Mayor of Naga. The current JMR Cup was conceptualized and started by Past President Roy Castro and continued by Immediate Past President Francis Seva. One major difference between this year’s JMR Cup and the previous ones is the elimination of the Secondary and Open categories. Choosing to focus on grassroots development, JCI Naga chose to open the tournament only for the Elementary level.

On lack of schools participating, it is recommended that the tournament be moved to an earlier date that would not conflict with school work or other sports activities. It would be best if a survey can be conducted to all schools that would be invited and ask all teams to identify dates that would be most favorable for them. Invitation letters should also be sent out 3 months before tournament start. Advertising for the tournament should also start around the time invitations have been sent out. Project chair also further recommends the initiation of a separate project that can tackle the problem of the schools’ lack of football coaches. On the expensive officiating fee, it is the recommendation of the Project Chair to use in-house talent. JCI members who are also football players should be encouraged to attend refereeing clinics and study how to officiate football matches. On the inability of teams to carry their school names, it is recommended that the succeeding Project Chair should send a letter to the DepEd asking permission for schools to join the tournament.

The project provided children the opportunity to grow as football players. It also shined light on the many problems still affecting the footballing community of the city. Possible solutions were gleaned because of this project. The project also kick started the building block for what JCI Naga hopes to be a lasting program for an education scholarship through football.