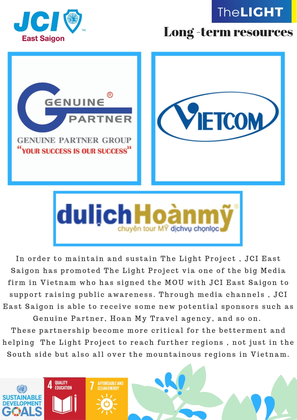 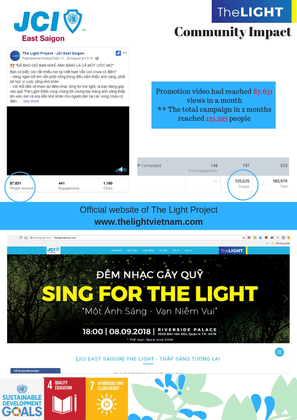 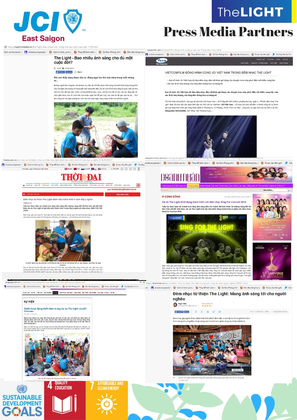 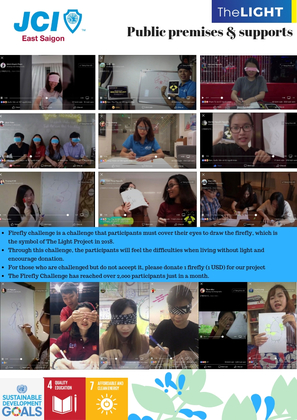 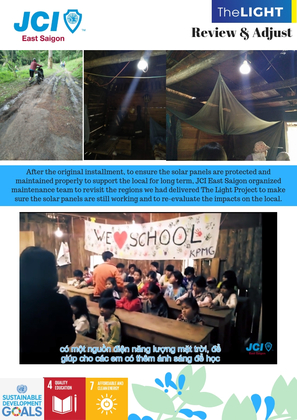 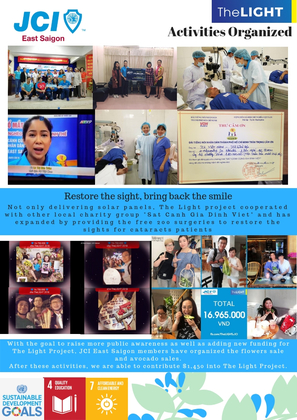 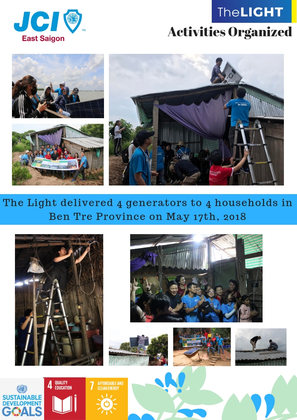 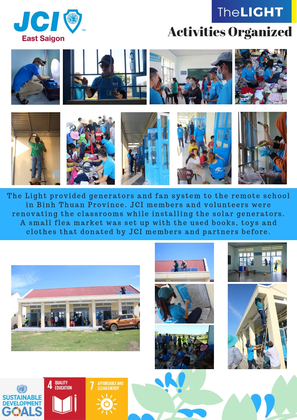 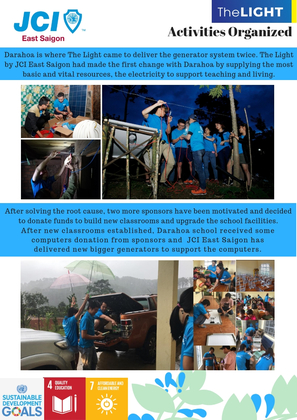 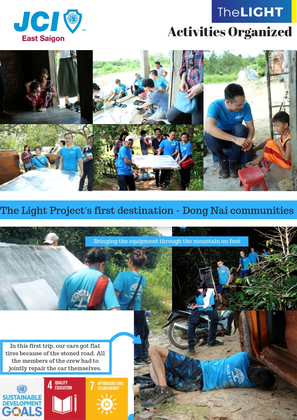 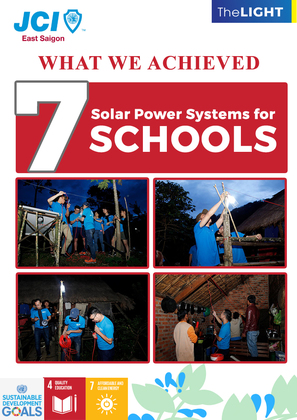 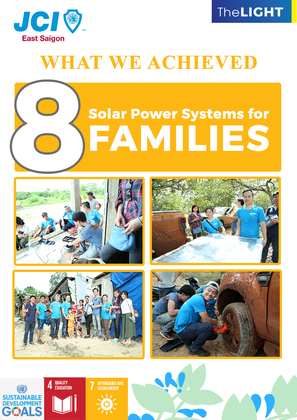 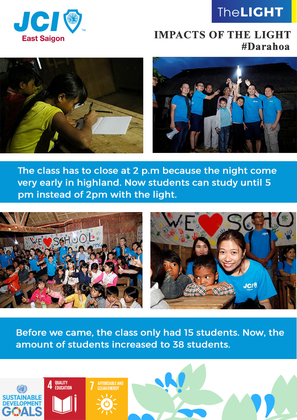 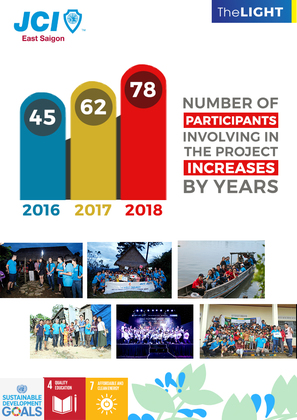 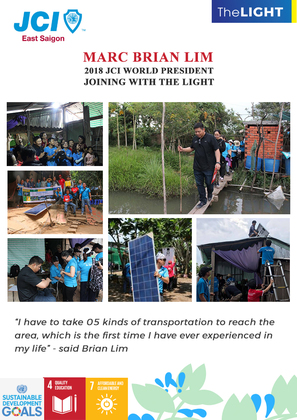 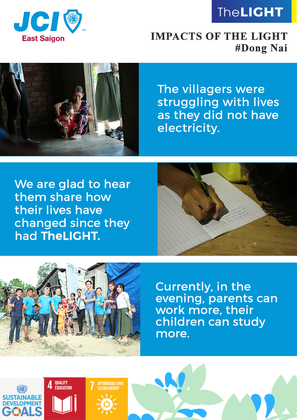 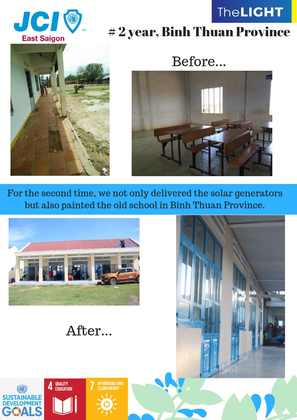 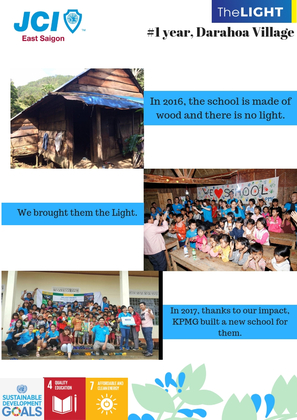 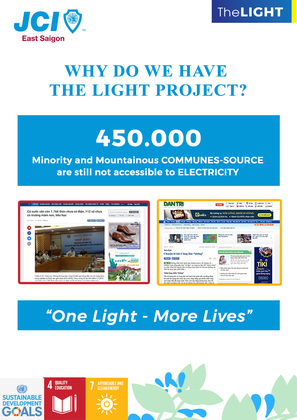 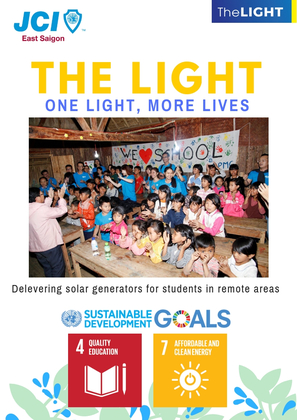 Many of the people who live in remote or rural areas where it is often too difficult or costly to transmit power using standard extensions of the power grid. Non-monetary indicators of welfare show improvements but gaps persist. According the world bank statistics in “Climbing the ladder –poverty reduction and shared prosperity in Vietnam “, there are still vast majority of Highland and Mountainous households living with no access of electricity which causing the difficulties for local schools and households to get quality life and educations, which in return, will affect their wage income to support their future and daily expenses.
Realizing that education plays crucial role in poverty reduction and provide chances for rural population to get better careers choices in current society, JCI East Saigon launch The Light program aiming to address the issue of lack of access to electricity in rural households by supplying and educate the local people to use the new source and more affordable energy: the solar panels and generators. Through The Light program, JCI East Saigon is looking forward to promote the bellows:
- Increase access to reliable and affordable electricity supplies
- Enhance rural connectivity and provide support to the government’s on going rural electrification program.
-Reduce poverty and gaps persist in Highland and Mountainous households, provide them the equal opportunity to live a food and full live

Poverty is a major obstacle for sustainable development of not only developing countries but also the entire world. Nowadays, poverty is defined as low attainment of social condition, for example, education, health, and nutrition in addition to economic deprivation. One way to cope with this multidimensional aspects of poverty is to promote opportunity (World Bank, 2001), and one of the opportunities is access to modern energy such as electricity. Although there are many government programs and supports from the Asian Development Bank allocated to Vietnam and helps reduce the poverty, however, the gap in accessing to welfare for the poor people and minority communities in remoted areas persist, especially , the access to electricity still not available for 450,000 minority and mountainous communes. According the survey and data provided by the local authorities, this population resided on mountain and highland areas, that causing challenges and too costly for connecting the government electrification program and they could not afford the electricity bill with their current income. Furthermore, it’s known that the solar energy generated by solar panels is less costly to set up and low maintenance fees with higher efficiency. According to Binh Duong Electric Utilities Organization, since the introduction of the solar electricity, monthly electricity bills have been reduced by more than 30 percent less electricity. With these facts, it is encouraged remoted communities to adapt the new energy and easier access to electricity with the affordable cost.

The World Bank indicates that, while upper secondary completion rates increase from 52% in 2010 to 59% in 2016, households in the Midlands and Mountainous regions, however remained broadly unchanged at 43 % between 2010 and 2016, and are significantly below the average of lower middle-income countries. Energy influences socio-economic condition of developing countries, access to modern energy like electricity will drastically improve the quality of life of those who do not have yet. The lack of energy access also causes serious adverse effects on the socio-economic condition of rural population. Therefore, achieving energy access improvement has huge impacts on people’s lives in rural areas. Considering electricity as a representative of modern energy, electricity consumption has significant correlation with GDP as well as HDI for 120 countries, and the countries which mark high consumption level of per capita electricity, attain upper rank of both economic activities (GDP per capita) and Human Development Index (HDI).
Education is also widely recognized as one of the most essential components for poverty reduction according to current discourses of developmental studies, which conclude that inequality of income affects opportunities of education. Moreover, primary education generally shows the highest return to investment. Poor households attain less enrollment and completion of schools because direct and indirect educational expenditures are considerable burdens. With all that researches and information, The Light has engaged the local solar panels suppliers and cooperate with local authorities to deliver the solar panels to remoted areas where the national electricity grid could not reach due to geographies and high cost. Furthermore, JCI East Saigon join hand with other international corporation such as KPMG-singapore, YMCA) to renovate and install some basic facilities such as tables, chairs for the local classrooms in mountainous province. Beside delivering the solar panels and generators, we cooperate with sponsors to donate the books and toys for children in the remote areas at the local community center that the students can visit and read during night time afterward.
Energy access improvement, in particular access to electricity, has huge impacts on education. For example, it reduces such drudgery and allows children to expand their opportunity for school attendance and other educational activities. Also, due to electrification, rural households obtain sufficient luminescence for study in a household at night and are able to utilize TV, radio, and Information and Communication Technologies for educational purposes. Thus, access to electricity and other modern energy creates child-friendly educational environment, and, in fact, electricity consumption per capita is related to the education index, a component of HDI

4) Instalment and maintains:
- After collecting funds and supports, JCI East LBODs will set up date and organize the transport to ensure the materials and facilities are delivered accordingly.
- Review and return one year after for solar panels maintainers and replacement if necessary.

In 2016, Sing for the Darahoa - the charity concert has raised up to 215 million VND (in cash and in kind) for the Light Project 2016 & 2017.
The concert has inspired more than 200 audiences who are the young businessmen in Ho Chi Minh City via true stories told by true people.

Futhermore, after the charity concert, we immediately conducted the travel survey and distributed solar generators in the two following locations:
1. Đồng Nai Province
We piloted one generator in Đồng Nai Province before launching the project in Lam Dong.
The sponsored house was in the jungle. We had to walk more than 3km to charge the battery.

2. Lâm Đồng Province
At Darahoa**, we sponsored and established 1 big electric generator system and 1 TV connected to Internet at the school to support the teaching and studying. We also sponsored one big generator for the common house of the villagers and 5 small ones to the typical houses.
•• (Darahoa is an isolated village in the north of Lam Dong, Viet Nam. Then villagers live in self-sufficient ways. Most of their activities start at 5 a.m and finishes at 6 p.m due to the shortage of light.

3. In 2017, TheLIGHT continues providing 2 generators to support the lighting and fan system at the remoted school in Binh Thuan. While waiting for the generator installing, other JCI ESG members had cleaned up and repaint the classrooms together with local children and teachers. Before ending our visit, we had organized a small gathering to giveaway secondhand / used toys, books, clothes for local children.

4. Early in 2018, beside giving the generators, The Light cooperated with Program "Sát Cánh cùng Gia Đình Việt" on sponsoring 200 eye surgeries for rough people (equivalent to 140.000.000 VNĐ), this is also The turning point of The Light Project when we propose the proposal to the Sponsor in 2017.

5. TheLIGHT project’s destination Ben Tre Province May 17, 2018. The Local farmers daily life on these isolated island in Cho Lach Dist, Ben Tre province, are improved with the access to electricity. We have delivered 4 generators to 4 households in Cho Lach Dist.

Besides, instead of the continued exponential growth that is modelled by the JCI East Saigon - JCI Viet Nam team, we are looking forward to receiving more companionship of JCI International Friends.

THE IMPACT OF THE PROJECT
Before JCI came to Darahoa, KPMG Singapore had sent the teachers to Darahoa to teach some extra curriculum on the weekend. The teachers proposed to build a school for the children here. KPMG was still considering at that time.
When JCI brought “The Light" to this small village, KPMG* started to build a new school here as they thought “They can even bring the electricity to those poor people, why can't we build them a school?"
(*KPMG is a professional service company and one of the Big Four auditors.)

After building a new school, the teachers countinued to propose to other organizations about "supplying facilities" to the school. YMCA** had launched that project after hearning about their story "Our journey since we had electricity and school". Ms. Sương (the teacher) wishes to bring a better life conditions to her poor students in order that they can have a better education for their future.
(** YMCA is The Young Men's Christian Association, commonly known as the YMCA or simply the Y, is a worldwide organization based in Geneva Switzerland with more than 2 billion beneficiaries from 125 national associations.

TheLIGHT project has united all sectors of society to create sustainable impact. Over hundreds of people were impacted by this grassroots initiative and people throughout Vietnam, as well as association or charity groups other countries, are looking forward to taking continued action in 2019 TheLIGHT project.

Chapter's Member population: 30 members, 50% of members directly involved in the project.
Each destination has at least 4 members of other chapters and 5 volunteers joining together with us, unitl now 30% of JCI Vietnam members had joined the field trip.
For Darahoa, before The LIGHT, there were 40 students. After The LIGHT, 70 students can go to school full day and 1 new school is built.

Community Impact:
1 strategy supplier who always supply solar panel with good price (some times free) and free installation and mantainence
2 strategy sponsors
2 gift sponsors
15 SME companies has been sponsored to the project.
1 National TV news broadcasted The LIGHT - Eye Surgery
The LIGHT had been announced in JCI Annually Report Magazine in 2016 and 2017
41 JCI Volunteers were engaged. They didn't only invested their time and energy, but also committed to be part of and support other projects in future.
Villagers are also our helping hands.
Created Facebook page in July 2018 , and our Facebook likes had increase to almost 800 likes. On the other hand, our promotional video had reached 87000 views and 123500 people.

Local Organization Impact:
- All JCI East Saigon members are participating the project with 50% of them had joined directly and the rest had donated the money and sharing the project.
- 41 volunteers
- Organizing charity events such as : flowers sales, fruit sales, used books and old toys donation. Major event for fund raising: Charity concert Sing for The Light ( Raised fund: USD 10000 in 2016, USD 24000 in 2017, USD 15000 in 2018). Tickets, DIY gifts donated by JCI East Saigon and JCI Vietnam members, companies and outsiders .
- Project's website www.thelightvietnam.com, and it's Facebook page had been uploaded the contents regularly
- Firefly Challenge is a challenge through Facebook and the mission is cover your eyes and draw the firefly to support fund raising Sing For The LIGHT Concert. The challenge had brought more than 1000 participants and more than 200000 views just for a month.
(https://www.facebook.com/jcieastsaigonvietnam/videos/922170417973838/)

For a better long-term and more sustainable impact, we should work together with other chapters and their projects such as projects which will provide books and combo of table + chair. Besides, other NGOs, building clean restroom at school is also a future combo for The LIGHT. Together, we make a bigger impact to the community. Calling funds from outside and oversea for a long-term run is another recommended improvement (partnership with oversea chapters).