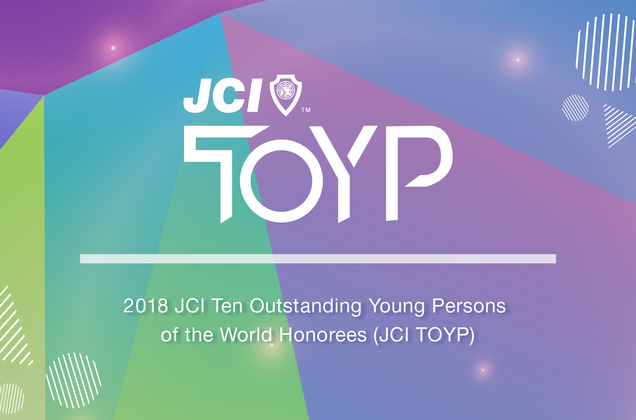 Through innovative actions, extraordinary achievement and dedication to serving others, the 2018 JCI Ten Outstanding Young Persons of the World (JCI TOYP) Honorees create sustainable impact in their communities and across the globe. Each year, JCI honors ten outstanding young people under the age of 40. These young active citizens exemplify the spirit of the JCI Mission and provide exemplary service to their communities, serving as honorable young active citizens.

Along with the final judging panel, JCI members and active citizens around the world voted online to select the 2018 JCI TOYP Honorees. The final judging panel was comprised of 2018 JCI President Marc Brian Lim; JCI Ambassador and MSNBC Anchor Richard Lui; Monika Froehler, CEO of the Ban Ki-moon Centre for Global Citizens; Chris Arnold, CEO of World Merit; and Nia Lyte, Founder and President of Koyamada International Foundation. After nearly 24,500 votes were cast and the judging panel reviewed the top 20 finalists, ten young active citizens have been selected to receive this honor for exceptional service, creativity and the positive change they have created in their communities and the world.

Get to know the 2018 JCI Ten Outstanding Young Persons of the World.

As the only female student in her Ph.D. General Surgery program, Dr. Dima Al-Naeb worked extra hard to demonstrate her capacity to fellow students and professors, taking advanced learning programs while also completing up to 15 surgeries each day. When the Syrian War broke out in 2011, Dr. Al-Naeb’s workload grew as the number of doctors decreased and war injuries increased. In Aleppo, then considered the most dangerous city in the world, without stable internet, no access to educational references, and trauma affecting everyone around her from patients to friends and family, she continued to pursue and obtain her Ph.D. at Aleppo University Hospital. Her persistence led her to becoming the first female Syrian citizen to obtain a PhD in General Surgery on quality of life. Dr. Al-Naeb’s dedication to the patient’s suffering from the war in her community and country proved to be an asset during the war, allowing her to remain focused on care while working under immense pressure during the crisis.

Cornel Amariei was born into a family who managed several personal handicaps, bringing creativity and innovation into their everyday lives. A bright mind from a very young age, he began programming at 7 years old and earned his first medal in an international robotics competition by the time he was 14. He developed one of his main achievements during his second year at university—an invention described as glasses for the blind. .lumen is a blind-assisting system that helps the visually impaired to navigate. Combining 3D sensors and advanced electric skin impulse devices, the system maps the environment in front of its user and informs the brain through electrical impulses. Always combining his scientific knowledge and creativity, Amariei continued to work on e-mobility projects and other inventions before founding an innovation group. Within 18 months, the innovation group gained international recognition and had applied for over 30 patents. Inspired by his parents and driven by his belief that innovation projects will be the vehicle of the future, Amariei continues to develop inventions that enhance mobility of people with disabilities, allowing them to access a full life with fewer obstacles.

As a leading global expert on security issues across Asia, it has been said that, “Heydarian has few peers when it comes to bringing us to an understanding of… the most geopolitically dynamic part of the globe.” Richard Javad Heydarian uses his writing skills to address the growing need for the public to understand the changing landscape of political thinking. Along with writing renowned publications including How Capitalism Failed the Arab Worldand most recently The Rise of Duterte: A Populist Revolt Against Elite Democracy, Heydarian serves as a non-partisan policy advisor and socially-engaged scholar to explore the most pressing political and socio-economic challenges of our time. As an academic and global affairs expert, he has authored close to 1000 articles and is regularly interviewed by leading media outlets such as BBC, Bloomberg and CNBC. With each article, publication and appearance, Heydarian advances his mission to inspire a new generation of leaders who push boundaries to create positive and lasting change for a better Philippines and a better world.

Despite being born with only one arm, from a young age Melissa Johns was driven to be an actor. Overcoming many barriers to succeed in her chosen field, Johns has dedicated herself as an ambassador for individuals just like her. After working in a children’s ward at The Royal Free hospital school in London, she discovered her ability to relate to and encourage young people facing the same self-doubt she once did. This discovery led her to launch the Quite Frankly Theater and co-found the TripleC organization that uses theater- and drama-based workshops to create diverse opportunities for young performers. Committed to creating impact, the message she conveys throughout her workshops is for young people to never hide what makes them different, because it is their differences that make them unique. Dedicated to overcoming the taboo of being disabled and in the limelight, she has started conversations and utilized her experiences to be a community advocate for equality.

Having been born with visual impairments, inhibiting him from attending school until the age of 12, Dr. Kamal Lamichhane experienced first-hand how persons with disabilities are often deprived of receiving an education. He realized his teachers and peer students had not faced such obstacles, and his community needed to better understand the social welfare of people with disabilities. As a university student, he had the opportunity to participate in a competitive training program in Japan, revealing to him the country’s disability-friendly infrastructure. His captivation by the great divide between the access he found in Nepal versus Japan encouraged him to delve deeper into the intersection of disability studies, education and economic empowerment, ultimately becoming the first blind person in Nepal to obtain a doctorate degree. As an associate professor at the University of Tsukuba, Dr. Lamichhane currently works toward educational development that is inclusive of people with disabilities across all levels of education. As a disability and inclusion expert, he also served as an expert in important meetings that drafted the Sustainable Development Goals (SDGs), ensuring persons with disabilities were included in the global development agenda.

Dr. Mutlu-Pakdil was driven by her passion to become an astrophysicist and overcome obstacles she faced as a first-generation university graduate and Muslim woman. As a Postdoctoral Researcher, Dr. Mutlu-Pakdil focuses on super-massive black holes and peculiar ringed galaxies. Her research has led to discovering an extremely rare galaxy with a unique circular structure, which is now commonly referred to as Burçin’s Galaxy. Her work has provided the first description of a double ringed elliptical galaxy that challenges current theories and assumptions about how the universe works and how galaxies start and evolve. Her investigation into dwarf-like galaxies has given insight into the larger structure of the universe, as they are linked to the Big Bang, as well as dark matter and dark energy. While unquestionably contributing new and valuable research in her field, she actively serves organizations that are working to improve the climate for women and minorities in science. Dr. Mutlu-Pakdil gives back to the community by providing impactful education programs that make science more accessible to everyone.

Serving as a nurse and educator Ronivin “Vinn” Pagtakhan, does what he can in his daily life to help people by taking to twitter to answer health questions and providing compassionate answers to people seeking honest and accessible health advice. Noticing that many of the questions he would receive were about HIV and sexually transmitted infections—an increasing health problem across the Philippines over the past decade—Pagtakhan founded the organization LoveYourself. LoveYourself’s aim is to open self-sustaining resource centers for youth and LGBT communities that offer education and counseling. The organization bridges gaps in the HIV continuum of care by scaling up HIV testing, linking diagnosed persons with treatment and counseling, and creating a community that has led to reduced loss of life. LoveYourself clinics provide a vital service to local communities, seeing over 120 clients daily and contributing 17% of the nation’s newly diagnosed HIV reports. Pagtakhan empowers LGBT persons, youth and the general public to recognize their own value and self-worth, take care of their health and well-being.

When the Syrian Crisis began in 2011, Azzam Sheik Alsouq quickly began to volunteer at the Syrian Red Crescent, serving as a nurse treating war injuries. Supporting the crisis situation gave him a first-hand look at the overcrowded shelters and the major gaps facing displaced persons. In 2015, Sheik Alsouq worked with UNHCR to coordinate the first outreach volunteer group in his home city of Homs. 100 community representatives from different groups joined the outreach team who focused on gaining and spreading skills including mobilization, community-based initiatives, interview and communication skills, facilitating awareness sessions and organizing recreational events. Sheik Alsouq has provided emergency health response in five camps for refugees and internally displaced persons individuals all across Syria. Since then, he has founded the Health Working Group for Refugees in Syria, which coordinates the health response from national and international agencies. Driven by his belief that we live our life when we live for others, Sheik Alsouq has never let his own status as an internally displaced person get in the way of serving others in need.

Agriculture is essential to Nigeria’s economy yet a growing population is diminishing resources. Recognizing that in the face of these challenges, her country needs a more sustainable agricultural ecosystem, Jacinta Uramah founded The Green Generation Initiative. The organization focuses in three areas: research development, quality agricultural education and capacity building of actors in the agricultural value chain. The Green Generation Initiative provides training and mentorship to farmers on nutrition assessment, sustainable supply chains, technology in agriculture, food security analysis and market penetration. Her initiative has organized over 2000 rural women into cooperatives that link them with adequate financing for their agricultural services. At the same time, they have trained teachers and students in vegetable production skills and raised funds for over 120 schools to establish vegetable gardens using climate-smart agricultural practices. To date, Uramah has impacted over 21,000 smallhold farmers and young people across Nigeria while also mobilizing the agricultural industry to redefine its standards for sustainable business, production and consumption.

Be sure to also attend the JCI TOYP Honoree Workshop also taking place on 2 November 2018 to meet the honorees face-to-face. Just like all JCI members, the JCI TOYP Honorees take action in their communities, creating sustainable solutions for a better world. In this workshop, Congress delegates will have the opportunity to meet, work and share ideas with these ten inspirational individuals. To solve the greatest challenges of our time, collaboration amongst young active citizens is key. Don’t miss this exciting program and return home to your fellow members with fresh ideas and solutions for taking impactful action, just like these Honorees. 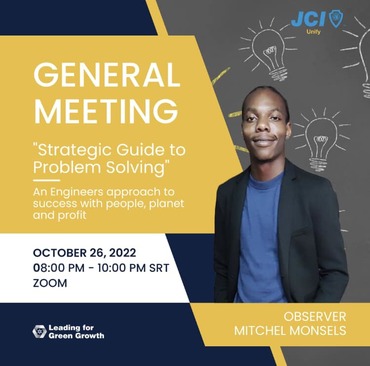 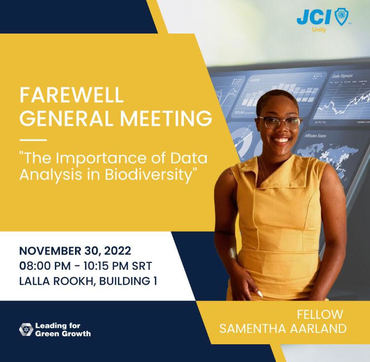